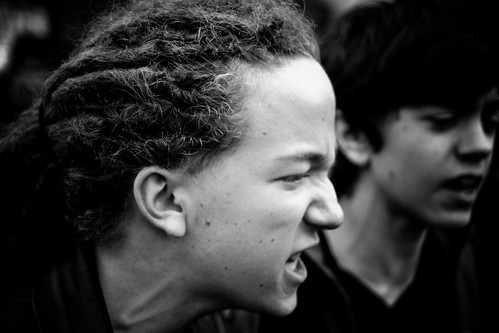 So, you are standing at the door greeting the high school students entering your fourth period class, and right away, you recognize the potential for trouble. All the signs are present: lack of eye contact with you, groups entering together, profanity, increasing volume, the celebratory "we have a sub!" followed by high fives. Everything about the vibe has you double checking you know where the office button is, where the referral forms are, and reviewing the tips in the substitute teacher packet. Despite the appearance to the contrary, the opportunity to create a positive shared experience with this group of students is possible.

Right away, you need to rewire your perception, not because you are wrong, because teenagers resemble sharks in how they can smell when teachers are feeling vulnerable. And, similar to sharks, their default setting is to attack. Remind yourself that there is a way into every group, and you just have to find it. Hang back for a second and observe how they behave in their natural habitat, and most importantly, identify which student they recognize as their leader. Second, build a personal relationship with the group by asking them to tell you something about themselves; call on their leader first. By calling on the leader, you will work with him/her to set the tone. The key then becomes what question to ask. Ask an open-ended question that has the least likelihood for an inappropriate or disrespectful answer like: If you could travel anywhere in the world, where would you go? Taking five minutes or so to get to know them a little will begin a rapport that is critical to being successful with difficult groups. Also, the dialogue shows that you value mutual respect. Equally significant and the next step is to communicate your boundaries directly. Identify your expectations about behavior and class work, and articulate secondary expectations about leaving the classroom, food, and/or cell phone use. Avoid threatening them with consequences because empty threats damage your credibility. When the time comes to discipline a student, avoid open power struggles. If a student challenges your authority, ask to speak to him/her privately in the back of the classroom. Explain to the student exactly how his/her behavior has violated your expectations and ask for compliance moving forward. So often, asking them for compliance solves the problem. Too often, teachers engage in the corrective dialogue in front of the whole class where the student feels threatened or with anger, which is blood in the water to the typical teenager.

A group of high school students primed to cause problems can both intimidate and elicit emotional responses from the substitute teacher. Both responses will encourage the disruptive behaviors. There are many things good teachers do to impact the tone of the classroom. How do teachers change the classroom climate from problematic to productive? Please respond below with tips and tricks you use to set a productive tone in the classroom.